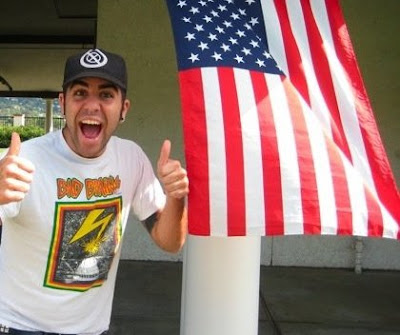 jason swartz is the only original member of media blitz. he is the reason I listen to the descendents. he is the reason I like punk. he is the reason high school didn’t suck. he’s a good entertainer, a funny motherfucker and one of the best friends i know. when I started this blog it was because I wanted an excuse to interview people. I can’t think of a more appropriate person or band to kick off my interviews with then him. they have a seven song 7” coming out on the 26th. they’re playing their release show that day in fullerton at the riff haus. i suggest you be there. this was copied and pasted from a facebook conversation on march 7th, 2010. enjoy:

Christopher:When did the skanks end, and media blitz begin?

Jason:the skanks was officially over when we had our first show and the venue "hogues" decided that the name was degrading to women. just like that, it was forever media blitz. they would not promote the name "the skanks"

Christopher: How old were you when you started the band?

Jason: i believe that when i started to jam with the people that would later be in Media Blitz i was in the 8th grade. however the name took hold in the 9th grade when i entered high school

Jason: Oh yea. nofx was the first "punk" record i ever bought.

Jason: The first show i ever went to was Weird Al with my dad in the 6th grade. however Dead Kennedys reunited was my first show. Di was on the bill too.

Jason: showcase was the place. it will forever be the best. Alot of great memories. it was the only place around orange county that was primarily catered to punk and hardcore

Jason: Punk never really needed a venue to survive. in the last year and half since it closed we have played way more often in orange county. the location has just changed. Garages, Wharehouses, community centers.

Jason: chain won't book us. and thats fine by me. i wish they would open to us but what can you do.

Christopher: fuck ‘em. can you talk about the line-up changes the band has gone through, and how the influences have changed. do you feel like the line-up you have now is "media blitz?”

Jason: i know alot of people have had things to say about me keeping the name media blitz. to me it comes down to 2 things.

Jason: 1. I am the only person who has not quit or left media blitz. We have gone through alot of members. alot of people could not hang. I never gave up on anyone. They quit on me. As far as i am concerned when you say "I am done with this" whether it be because of drugs or conflicting interests or whatever you give up your stock in the band. No one else could hang. I truly believe in this and i am not done playing. I have worked hard to build a name and i am not going to let some undedicated people ruin my work. and 2. It's going to sound kind of shitty but i feel i owe it to ben. We would always talk about touring and recording and making records. i feel that as long as i keep the name i keep the history that comes with it. All of the best times in my life have been because of this band. Not just shows. Just being around all of the people that have been connected to it is great.

Jason: I had known jeff and eddie through Drencroms. they were having singer problems. i had called jeff to start up media blitz again after it all went sour. He was into the idea and i love his work ethic. Eddie and i never really got along until we were in a band together. In fact i really did not like him. It's funny because eddie's gutiar style is really what sets us apart from any other punk and hardcore bands and really gives us originality. Ryan tried out on bass because he was friends with wes. we get along and everyone knows their role

Jason: well it's the first thing i am proud of. It will be our first real attempt to push a record. We are doin a full US and then another west coast. It has alot of hardcore, punk and metal influences. the song writing is alot better.

Jason: yea. we have alot of friends that do distro. the label business is not going so well right now. it's good because we can do all of it on our own time

Christopher: that's awesome, i'm really excited for it! thanks alot for your time.

Posted by Christopher Gordon at 12:05 AM