video :: dawes - when my time comes

dawes will be back in l.a. on july 10th to play a free show at the getty museum.
Posted by Christopher Gordon at 7:37 AM No comments:

video :: we barbarians - there's this there's that

We Barbarians / There's This There's That from johnraines on Vimeo.

directed by matt aveiro of the cold war kids
we barbarians have the monday night residency at spaceland in june.
Posted by Christopher Gordon at 7:33 AM No comments: 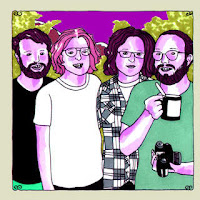 I was not sure if this was going to happen but they just posted the songs today. the henry clay people recorded end of an empire, switch kids, hand on my shoulder, and working part time. you can download the songs here.

their first record review for their new album ‘somewhere on the golden coast’ was posted a few days ago on radio free silverlake. you can read about that here. They posted the tracklisting in the the comments section. I haven’t heard the album yet, so I can’t really speak to it, but I’m familiar with 7 of the 11 songs, and I’m kind of disappointed that their songs taste of the tasteless and randy where’s the rest of me didn’t make it onto the album. Other then that though I’m really excited to hear it.

their record release show is going to be at spaceland june 8th with the hectors and olin and the moon.

Posted by Christopher Gordon at 12:12 PM No comments:

i believe last night was my fifteenth hcp show. the fillmore is this absolutely incredible venue. the walls are filled with posters of past shows: a hall of fame, almost. as you walk up the stairs, there's a big bucket of apples that greet you at the top. i'm not really sure why, but i sure as hell had one. the sound at the venue is awesome, it is easily the nicest place i have ever seen them play.
when they came out on stage, they came out with their original drummer eric, which was really cool to see him back with the band. they opened with digital kid and went right into fine print. their setlist was a good mixture of newer and older songs. it was nice to see them play rock and roll has lost its teeth. slow burn is currently stealing the set for me. andy has lead vocals on a new slow ballad, which is really good. they ended with working part time and seemed to have won over the drunken drive by truckers fans by the end of their set.
drive by truckers fans are easily the strangest group of people i've ever met. it's a really weird mixture of drunken thirty year olds, fifty year old country fans and the random teenage indie rocker. dbt had really cool artwork on stage, but i didn't catch any of their set.
andy invited me back and insisted i finish their bottle of jack. i was hammered within five minutes. there were a few drunken promises made. one of which was if roman candles ever headlines the glasshouse, vallejo by knife has to open and play a twenty minute set.
thanks to todd for the directions home. i had to stop at every other bart station to take a piss, and wound up catching the last ride back to berkeley. it was a really perfect night. probably my last show of the semester. i can't think of any other way i'd rather end my first year at berkeley. started the year with some free modest mouse and ended it with some free henry clay people. thank you san francisco.
Posted by Christopher Gordon at 7:37 AM No comments:

i was a teenage anarchist - video

when i first started hanging out with my 'punk' friends, i still listened to mostly indie rock. they did not want to listen to the get up kids and desaparecidos, and i had no interest listening to the varukers and 46 short. there was not a lot we could agree on, so we usually wound up compromising by listening to ska.
it was the summer of 2005 when i first heard sink florida sink and was blown away. while i was working at dairy queen, someone was kind enough to burn me a copy of the acoustic e.p. about a month later jason asked me if i had heard this band called against me! i said i had. he burned me a copy of as the eternal cowboy and i became a fan for life.
without against me! my knowledge of bands like crass or discharge would have probably been non-existent. they even opened me up to bands like the young pioneers and thankfully to plan-it-x records. against me! always brings the best up and coming punk bands with them on their headlining tours. they have turned me onto a ton of new music. Crime as forgiven by was the first 7" i ever bought, so i have a huge emotional attachment to them.
this was the one band all my friends and i could agree on. being 16 and having a band like against me! was one of the most important things that happened to me. it was the perfect gateway band for getting into punk. it was exactly what i needed. i haven't been too stoked on them in a couple of years. everyone pretty much blew off new wave, myself included. yet, their new single, i was a teenage anarchist, is something special. it's really good. if this is an indication of the rest of the album, we're all in for a treat. plus the video is pretty awesome. it's directed by Marc Klasfeld. enjoy:
"I Was A Teenage Anarchist"

Against Me! | MySpace Music Videos
Posted by Christopher Gordon at 9:50 AM No comments:

Labels: against me, video

THE END OF THE WORLD FEST

when i started roman candles with riley, so much of what we did was based on the ethic that plan-it-x had, and the ideas of chris johnston. plan-it-x taught me way more about punk and diy then sst or dischord ever will. it was and has been diy for my generation. something everyone should aspire to and look up to. "if it ain't cheap, it ain't punk"- arguably the most meaningful thing i've learned in the last five years, and something i've taken to heart.
this label has meant so much to so many people, myself included. next summer plan-it-x will come to an end with its 100th release, and a festival titled 'the end of the world fest.' that is where i will be july 2011. i'm sad to see it go, but the future looks bright. you can read about it here.

or for those of you to lazy to click on the link:
Hi, So, As promised, it's May 5th and I have the final answer on PIX FEST. The answer is NO. Sorry. The reasons are: 1. There is no electricy in the park (it was damaged by a flood) and although we could us a generator for the stage, I think it would be unsafe to have a dark and powerless campground. 2. The city council said they would be mailing me a contract (many weeks ago) that would detail what I needed to provide. I still haven't gotten it and I think it's too late to book a fest. Some of the things they mentioned that I would have to provided include, bathrooms, security and insurance for the event. I've done some research and all of these things will cost a lot of money, making the benefit aspect of the fest a waste of time. I wouldn't want to have a fest just for the sake of having one. I would want it to raise a lot of money for a good cause, that is the only reason PIX fest has ever happened. So, sadly, there will be no PIX FEST this year. Sorry. But, ...

There will be one next summer. It will be one of the last big fests before the end of the world. I'm calling it, THE END OF THE WORLD FEST. It will also be the end of PIX records. I plan to release PIX #100 which will be the book, "Free Pizza For Life", the story of Samantha and I stealing pizza and starting a DIY punk label on the day of the fest. The book will come with a DATA DVD with all the PIX music ever released. Why? because I don't want to be a dinosaur. CD sales are dropping like crazy, people don't want them anymore. I know LP sales are up and people love records, but, that doesn't include CDs. Most of all, I set out to start a budget label that sold CDs cheap, so I don't want to tarnish the name of PIX by releasing LPs and selling them for higher prices. I've thought about this a lot and I'm not sad. I plan on starting a new label when PIX is done that releases nice looking, unique LPs, cassettes and comic books. So anyway, I hope to see you all at END OF THE WORLD FEST sometime in JULY 2011 in the midwest. All the cool bands will be playing. It will be a benefit and your ticket price includes your copy of PIX#100. More info soon.
Posted by Christopher Gordon at 12:40 AM No comments:

MANIC HISPANIC :: RUDY CHOLO
Posted by Christopher Gordon at 10:56 AM No comments: 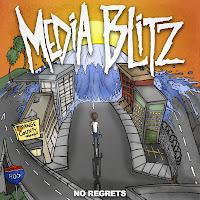 media blitz's new e.p. punches you in the face for eleven and a half minutes without easing off. These seven new songs comprise their best recordings to date. The musicianship is better, the lyrics are better and the artwork is awesome. In Never Grow Up, when Jason sings, "what we do has meaning/and i'm doing my part/not because they told me to/but because it's in my heart" you believe him. As a long time fan of the band, this is best they've ever sounded. If only we were spoiled with a release this good every year . . .
rating: 7/7
you can download it here.
Posted by Christopher Gordon at 10:37 AM No comments:

avi buffalo's new video for 'what's it in for?'
silversun pickups video for 'royal we'
Posted by Christopher Gordon at 3:39 PM No comments: