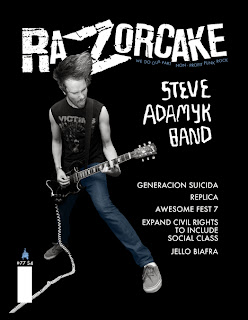 i've still got copies of it if you want one

The Stowaways is a slapdash xeroxed document that embodies the urgency and variety of Southern California’s DIY punk scene. For all its aesthetic blemishes (which somehow enhances the earnestness), Chris Gordon’s refreshingly self-assured voice and proudly anti-revisionist stream-of-consciousness format ensures that each issue is a home run. The show reviews might be fascinating only to California residents or those interested in the diary-like minutia of people watching, but there are many worthy humorous observations such as: “The lead singer looked like the dirtiest fucking sewer rat....He literally looked like a Teenage Mutant Ninja Turtles’ character.” With every new issue, I am reminded of the DIY community’s open-mindedness by the growth of The Stowaways’ letter column. I am also reminded of Field of Dreams: “If you build it, they will come.” –Sean Arenas (Chris Gordon, 5802 Wendover Rd., Yorba Linda,CA92886, fuckthestowaways.blogspot.com)
Posted by Christopher Gordon at 11:18 PM No comments:

I'll begin by saying thanks to Chris of Roman Candles for sending us all the tapes and singles over the years, despite the fact that I think his music is awful and have consistently said so. Despite the fact that the music he plays is some of the most unappealing stuff I've ever heard, Chris has somehow decided to continue to send records in, which I think he does just as a goof at this point. I mean, it's not like this "band" is getting any better or I'm going to start liking this crap all of a sudden. I'm not sure how he even got to Termbo in the first place, as I think he likes "Termbo music" probably about as much as I like his. Anyway, whatever the reason is that Termbo became a footnote in his band's story I'll never know, but I'm happpy for him, as this LP is on Plan-It-X Records, which I think was pretty much his dream label when he started sending me tapes years ago. You made it buddy. Congrats. The record still sucks. For your reference, Roman Candles are from Yorba Linda and play some of the most awful whining and confessional-zine style bullshit folk-punk. This record seems to be all acoustic, so at least he put away his fucking accordion. Just awful. Chris also does a zine called The Stowaways, wherein he whines about being a well-to-do college graduate from the suburbs and interviews bands I have never heard of - really, his zine is about as good as his music, but I'll hesitantly give him points for trying. Maybe not. (RK)
(Plan-It-X Records // www.plan-it-x.com)

Read it HERE
Posted by Christopher Gordon at 9:43 PM No comments: