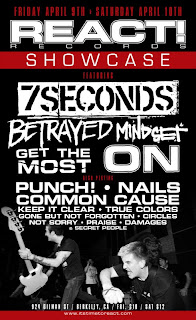 some of the kids at this show were really fucking rude. bands affiliated with react records preach in between almost every song. they talk about being vegan, being straight edge, and keeping the scene alive. numerous times, while these preachings were taking place, kids would scream, "shut the fuck up and play some music," which i can understand, but i also think that if all you came to hear was the music then why didn't you just listen to their albums in your room. why did you come to the show at all? but with that said there was also a lot of really cool people there as well. it was nice to see hardcore kids and punk kids dancing together. it was nice to know there were eight bands that played and not one fight broke out. i'm glad gilman exists. i'm glad hardcore exists. and i'm glad seven seconds is still playing thirty years after they started.
not sorry played first. they were okay. didn't really stand out.
praise played second. the lead singer was definitely the happiest frontman i saw all day.
nails played third. they were a three piece hardcore band. the only band that day without a "front man." the had a lead singer, but he played guitar as well. it was a nice change of pace.
keep it clear are from vancouver, canada. the lead singer was funny and made a lot of jokes. i liked them.
common cause are from norway. it was nice to see how welcoming the kids made this band feel.
on was the first band that actually stood out. they were really solid hardcore. i really liked them.
mindset was awesome. their leadsinger was really intimidating. he looked like an ex marine. this band was completely captivating. i really enjoyed their set.
7 seconds hasn't played 924 gliman st. in twenty-three years, but kevin said, "it's nice to be back." i think a lot of punks were disappointed that there wasn't a circle pit. but this wasn't a punk show it was a hardcore show so be respectful: stage dive and have fun. after the first few songs everyone seemed to do exactly that. it was fun. they played a great set. all the hits. they ended with rock together. i hope they play for another thirty years.
i rode the bus back with this kid max from germany. he is in this really cool band called the booze brothers. you should check them out. they're really good.
Posted by Christopher Gordon at 10:57 AM