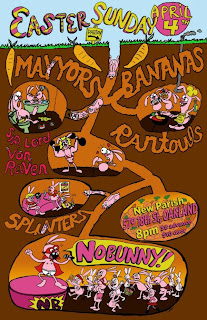 no bunny celebrated their 9th annual easter egg bash at the new parish in oakland.
sir lord von raven played first. musically they were pretty good, and i can understand why people might like them, but they didn't move at all on stage. they were pretty boring.
the splinters played second. they had a different drummer this time. they were solid, i like them more every time i see them. i think my favorite song by them is currently 'mysterious'.
the rantouls played next. they have this really poppy bubblegum sound, and i really liked them. i just wish they didn't have to dress up to "sell their image." that kind of shit bugs me.
the mayyors followed them. according to one of the splinters they don't have a myspace and only play like once or twice a year. in my notes i have "probably the coolest most rockin' band ever." to expand on that, their lead singer was one of the most engaging frontmen i've ever seen. they're guitarist was metal as fuck and had the dumbest but most badass metal stance while he played guitar and the bass player kept rolling around on the ground. it was awesome they should have headlined. they stole the show. i wish they played longer, but they took too much time setting up. this band is a highly recommended live experience.
the band that i really went for was the bananas. the lead singer was hammared, and i'm not sure what was funnier to watch: him or the look of confusion on the bouncers face for the entirety of their set. they were great though: everything i love about pop punk. i wish they played more often. plus i have a crush on their bass player. a great set from a great band.
no bunny headlined their birthday party/anniversary celebrating nine years of playing music. the first time i saw them i was probably the drunkest i've ever been, and don't really remember their set besides the fact that i loved them. the second time i saw them they played acoustic at gilman and really disappointed me. last night i saw them sober, and for the first time i feel like i can give an honest assessment of them as a live band. with that: they are everything rock and roll should be. they are a little mysterious, they are engaging, they are rockstars. i'm a huge fan, and would love to see them again and again. they put on a kickass show . . . i can't wait for next year.
Posted by Christopher Gordon at 10:59 AM