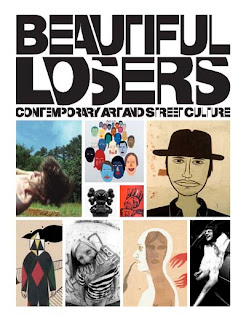 never has a film left me feelings so inspired. a documentary on d.i.y. art directed by aaron rose and and joshua leonard in 2007, the film focuses on a collective of artists including shepard fairey, ed templeton, harmony korine, and margaret kilgallen among others. based around the outcast subcultures of graffiti and skateboarding, the film dives into the minds of artists that sparked an underground movement. through eighty-nine minutes of interviews, the film captures what it is about street art that has left a profound impact in the minds of kids. with that impact, the film shows how these forms of art have transcended into the mainstream creating a medium for losers and junkies alike. one of the best documentaries made in years. be sure to catch this inspirational film.

Posted by Christopher Gordon at 10:35 PM