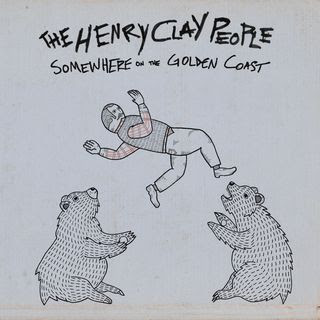 the henry clay people return with their fifth full length record. in the seven years that they have been a band, they easily have over a hundred songs in their catalogue of recorded material. the eleven new songs that make up somewhere on the golden coast are simply a document of the band during the past year and a half.
in this time the band has gone on two full u.s. tours with the airborne toxic event, an east coast tour with ben harper and the relentless 7, and a west coast tour with the drive by truckers. they have played austin city limits and lollapalooza.
the album opens with a short minute and a half song titled nobody taught us to quit before coming in with a re-recorded version of working part time. many people's complaints about the record are that some songs didn't make it onto the album because their new label tbd requested the band re-record working part time and this ain't a scene. but anyone who has been following the band for the last few years knows that working part time has now shown up on six different releases:
1.working part time e.p. (echo residency - february 2008) 2.working part time 7" (jaxart - march 2008) 3.live -mondays at the echo (spaceland recording - april 2008) 4.for cheap or for free - (autumn tone - october 2008) 5.daytrotter sessions (daytrotter - june 2010) 6.golden coast (tbd - june 2010).
in addition to re-recorded versions of songs you also get a song that has been reworked. two lives steals the guitar riff from the song 'somewhere on the golden coast' which originally appeared on the working part time e.p. back in february 2008.
so, if these are really your complaints about the record, then they simply don't hold any ground. this record fucking rocks. ya we would have liked to see 'randy where's the rest of me', but that came out on the hear ya live sessions. ya we would have liked to see 'switch kids', but they released that on the rock n roll summer circus compilation. therefore, the only song they haven't released that we would have liked to see is 'taste of the tasteless,' but chances are it will come out as a b-side on a 7" . . . so you should really stop complaining.
onto the record . . .
picking up where for cheap or for free left off you get the rockers: working part time, slow burn, end of an empire, this aint a scene and your famous friends. you get the slower tunes: digital kid, keep your eyes closed, saturday night, and two lives at the end of a night. you also get to see a new side of the clays with temporary fix where andy takes lead vocals on a slow ballad. the album is different from previous albums due to the addition of jordan huddock on piano. he pretty much holds the album together.
honestly my only complaint is that with the previous two albums blacklist and for cheap you got one song each of lead vocals from noah green with 'the man in riverbed' and 'bulls through' respectively. even though he doesn't sing on any songs he does play bass on 'working part time' and 'this ain't a scene' (eric scott plays drums).
at the end of the day, the henry clay people put out a full length record worthy of year end lists. whether you're a new fan or a longtime fanboy, this record is great listen all the way through.
rating: 11/11
Posted by Christopher Gordon at 10:11 AM