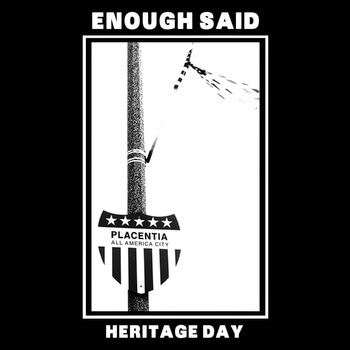 I spend a lot of time joking about how I hate Eric Aliberti, but the truth is I don't. And as much as I want to hate his band, this 7" surprised the shit out of me.  Enough Said's been around for years at this point, and their past demos never really did anything for me, but the lyrics on this record are super on point. The title track Heritage Day exclaims

This record hits hard, and it's over before you know it starts. These Five songs in seven and a half minutes will punch you in the face and knock you out before you realize why you're on the floor with a lump on your skull. It's fucking scary good. I don't even like hardcore, and I like this. This is my favorite batch of songs that Madison has ever played on with the exception of Creatures' Vesuvius. It's good. It's really good. And you can buy it HERE. They're probably the only band that'll ever rep Placentia, and that's okay with me. 400 on back. 100 on white. Do it.