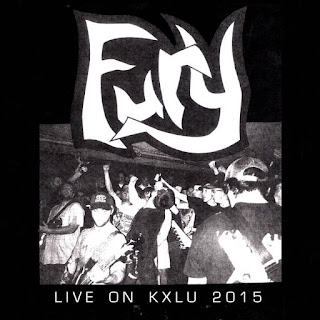 Fury's second 7" is a live one from a set they played on March 20th on KXLU 88.9 FM Los Angeles. The 7" has five songs; two of which were on their demo that came out last year on Moshers Delight, and the other three songs are from their Kingdom Come 7", which came out on BBB Records. So technically nothing's new here, but the recordings themselves. Through these recordings though you get that raw live energy that they bring to every show. This is a glimpse of a young band with a ton of confidence and promise of things to come. Anyone who supports college radio is fine by me. Give this a spin. They're selling fast.

You can pick it up from BBB Records HERE.

or from Video Disease Records HERE.
Posted by Christopher Gordon at 12:50 PM