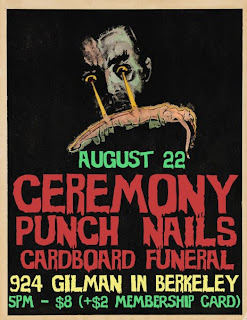 gilman has easily become my favorite venue. the history has a lot to do with it, but mostly it's the little things like how they still sell copies of maximum rock n roll, or how hardcore kids and punk kids hang out together, or the black on white pictures on the wall when you first walk in. i guess when you add up all these little things, it makes every show there seem special.
cardboard funeral played first. maybe i'm wrong because i don't really know anything about them, but i feel like they are a pretty new band. their sound wasn't bad, but they just weren't for me. they didn't stop in between any songs, which i liked. but because of that they played a really short set.
nails fucking rocks. todd jones is a pretty amazing frontman considering he does what he does while shredding on guitar. this is my third time seeing them this year, and they get better every time. during their set todd said something to the effect that, "we have a new album out. you can pick it up in the back if you liked what you heard, and if not we only have two more songs. . . nobody in this band is cool. nobody in this room is cool. if you don't like something than you don't like something and that's it. don't be pretentious." i always like to hear what people have to say. i'm really rooting for this band. they're fucking great.
punch played third. this was my first time seeing them. there has been a lot of hype on this band at least among my friends, so i was pretty excited to see them. needless to say, they lived up to the hype. the lead singer, meghan, broke her ankle so she was in a huge cast and on crutches. i imagine that had she not been in crutches, her stage presence would have been incredible because despite the fact that she could not move on stage she was still really good. the fact that she is beautiful doesn't hurt either.
seeing ceremony at 924 gilman st. is a must. last time i saw them, i swore that there front man was the best i've ever seen in a hardcore/punk band. i stand by that. they opened with "the doldrums" which i thought was cool because it's a not a punk or hardcore song, but they still play it with the same aesthetic. the lead singer was on the floor just running into people for it. when the song was over they went right into "sick," and there was no going back for the rest of the set. it was loud rambunctious hardcore. meghan from punch sang lead vocals on a song which was cool. screaming, "i've got a lot of problems/i'm a fucked up kid" with a room full of people has been my favorite part of their set both times. all in all, a pretty perfect show.
Posted by Christopher Gordon at 12:08 PM