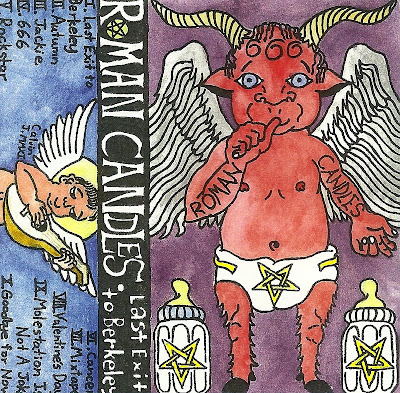 terminal boredom reviewed the newest roman candles tape
Roman Candles "Last Exit to Berkeley" cassette
Over the past years I've reviewed enough Roman Candles releases that these guys now seem like friends. Like that one guy you went to school with, that you weren't really all that fond of in the first place, but he was just always there since you grew up on the same street or whatever so you tolerated his presence. But you could do without as well. It's to the point where they send a short letter with each release now (I think the last one said "Suck on this Termbo."). I never like their music and say so in their reviews, but they just keep sending shit anyway. Love-hate relationship? Friendly rivalry? I dunno. They said in this package that this is their last one. I'll miss you guys, but I won't miss your corny acoustic folk music or whatever this shit is. Take it easy Christopher, you're a good sport, and congrats on graduating.(RK)
(Aztec Records // romancandlesmusic-at-gmail.com)
Posted by Christopher Gordon at 9:57 PM