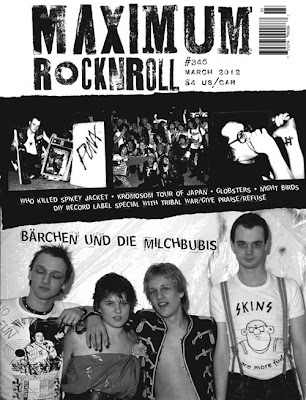 Maximum Rocknroll #346-MAR-2012
reviewed the stowaways issue number four. pick up a copy.
THE STOWAWAYS #4 / $1
8.5 X 11 - Copied - 9pgs
This zine briefly documents a scene that I try and avoid, you know, the whole cutesy, pop-punk, kinda-folky, make you feel like you're at your six year old cousin's birthday party type of thing. So, maybe, I'm a little biased. But, honestly, I found The Stowaways to be a little on the boring side. The interview with Joyce Manor, which pretty much only covers the fact that the band doesn't like how their recordings sound and what records they like, while simultaneously serving at the centerpiece of the issue, resembles an awkward, small-talky conversation that doesn't seem to go anywhere. Even the record reviews made me feel out of the loop and isolated. For instance, the author describes one band as a "punk version of Jack Johnson," which to me sounds quite frightening. But, hey, what do I know?It's quite possible that someon who enjoys the kind of music covered in this stack of papers wouldn't be so harsh. (KR)
The Stowaways / 5082 Wendover Rd. / Yorba Linda, CA / 92886 /
romancandlesmusic@gmail.com
Posted by Christopher Gordon at 11:25 AM