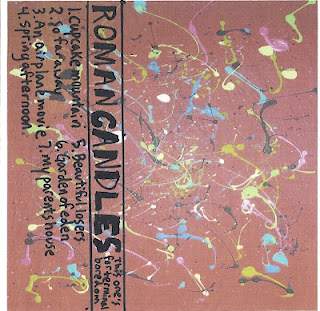 Razorcake reviewed the most recent Roman Candles tape "This One's For Terminal Boredom"
I still have a few copies left. if you're interested, just email me romancandlesmusic(at)gmail(dot)com

There’s a classic scene in the movie Animal House where John Belushi’s Bluto character comes across a young man at a toga party earnestly strumming away on an acoustic guitar to a group of enthralled co-eds. In a fit of pique our hero grabs the guitar and promptly smashes it to pieces. Besides being one of my favorite movie moments, this guitar killing is the feeling that overcomes me while listening to this cassette. Seven songs of Townes Van Zandt depression channeled through Rodney Anonymous of The Dead Milkmen vocals. I thought perhaps lyrics like “I want to star in an Airplane movie” signaled some humor; after all who wouldn’t want to star in a movie with the late, great Leslie Nielsen? But alas no, our bard wants to star in a movie played on an airplane, which no one in fact watches. This is someone’s creative effort written self-admittedly during or right after college amidst a bout of depression. If poorly recorded acoustic ballads of sadness, love, and loss are your thing, this might just be right up your alley. –Mark Twistworthy (Roman Candles, Self-released)
Posted by Christopher Gordon at 11:43 PM