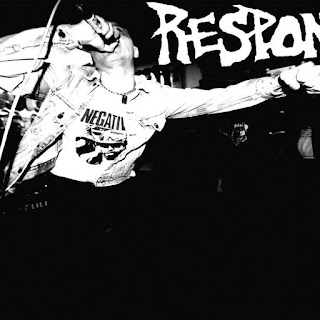 All I know about this band is that Madison is in it. I didn't find out though until he sent me an email talking about the tour they went on over the summer. Four songs of Youth of Today influenced hardcore. The demo's less than 5 1/2 minutes long. It flys by. Honestly, most hardcore is usually lost on me unless the vocals stand out. In this case the vocals do, and they're catchy. The first song "In My Way" is the best on the demo, but that little breakdown in "Dropout" is great. "I want to keep my mind clear and free / THERE' NO CHOICE," is a super catchy straight edge track - it's great. Response is fierce. They're punk. They're good. And they don't do drugs. I really dropped the ball though with this release. It came out on tape on Fineprint and Video Disease
Posted by Christopher Gordon at 10:06 AM